TLT’s Maria Connolly, who’s team has provided legal advice to a number of Roadnight Taylor’s clients, spoke to Hugh Taylor on what both landowners and developers should be looking for in clean energy scheme leases. Maria has an enviable track record, both as Head of Real Estate at TLT, and in leading its cross-discipline clean energy team.

Hugh: What are the main lease requirements that clean energy developers are looking for?

Maria: Because a solar, wind or battery storage scheme is a capital value project, that investment needs protecting by means of a long-term lease arrangement. Taking a project to operational stage means securing land rights alongside planning, grid and the £multi-million investment needed to achieve build-out. Therefore, the developer needs to have legal documents that give them the security required to protect those rights – and, importantly, gives their bank what they need to fund the project.

It’s worth mentioning that when funding a project the bank will want to protect its interests. Therefore, the developer needs to have the ability to require its landowner to enter into a direct agreement with the funder as this protects the bank by giving it the right to step in and remedy any breach if, in the worst-case scenario, the developer as the tenant breaches the terms of the lease.

At the same time, the developer needs to ensure that the land rights are flexible enough to accommodate issues and opportunities which may only become apparent when the build starts.

One of the most talked-about topics is decommissioning and reinstatement. A landowner will be looking to the end of the 30-plus year lease arrangement and what happens if the developer can’t get the site back to usable, agricultural land. In order to provide landowner security, a decommissioning and reinstatement bond clause may be required as part of securing land rights.

This may mean that the lease includes a provision where, after a certain number of years (usually years 10 or 15), the developer is required to put a bond, or other form of security, in place to give the landowner protection should the developer fail to make good the site at the end of the lease term. This ensures there is a pot of money to cover any reinstatement obligation. However, reinstatement security isn’t a necessary feature of every project; we see as many with reinstatement security as those without.

Hugh: Are there any requirements that a landowner should consider stipulating that may be absent from a developer’s first draft?

Maria: Our approach is to present a balanced set of documents that genuinely reaches a sensible position between what a landowner would expect to have in the documents and what a developer could tolerate in terms of the market or bankable position.

A landowner will be particularly looking at the commercial terms and rent. There are often discussed early on and will cover what is the rent going to be and in what model – a rent per acre or per megawatt, or a base rent which then gives a top up in relation to a percentage share in the gross revenue that is derived from the project, are examples.

They may also want to look at reinstatement, and while many requirements will be site and circumstance specific they might think about crop loss provision which is capped at a sensible level.

In addition, a landowner might want to understand the developers plans regarding future disposal of the project, and what control they have if a developer wants to assign or transfer the lease to a third party. If it’s a third party, there should be some form of consent, not to be unreasonably withheld, and a landowner will also want to make sure that any new lease holder on can actually perform the obligations of that lease.

Hugh: Many of the leases entered into during the first wave of solar and wind farm deployments were for relatively short lease terms. Are you seeing many being extended?

This is a positive move for the sector as many existing projects only have leases for 20 or 25 years, which reflected the position under the time-limited Renewables Obligation or Feed-In Tariffs subsidies – the projects were built to align the operating period with the period of the subsidy and, then be decommissioned.

Now we’re in a subsidy-free world, and technology has advanced, projects have a much longer operating life. If the developer can get extended planning permission and an extended lease from the landowner to operate for another 10 or 15 years, it can be a win/win. The landowner has a viable clean energy generation asset on their land, and continues to receive the benefit of the rent – while the project benefits commercially from operating over a longer period.

Hugh: Is there anything landowners should look out for if their developer tenants are seeking an extension?

Maria: Landowners are very positive about asset life extensions as they see it as an opportunity to secure future income beyond the level they would have received under a shorter period.

Hugh: We find landowners often use local law firms they may have worked with for generations. In your experience, what makes a specialist energy lawyer a better choice for an energy lease?

We believe that it’s about working together with landowner’s lawyers so ultimately, we get to the position where the landowner ends up with a project on their land and the developer has the rights to do that. There are various ways we can help ease the process and sometimes there are challenging concepts where we might take a different approach to an energy project than one would take for an ordinary real estate or agricultural matter.

Hugh: If there is one piece of advice you would give to landowners in their dealings with developers, what would it be?

Maria: The key for the landowner is to work with the developer to reach a common goal of getting a good, sensible market-facing set of documents which will enable the clean energy project to be built, funded and developed. Unfortunately, there are situations whereby an impasse is reached because some fundamental bankable clauses haven’t been agreed and that can means the project never gets off the ground.

While the landowner’s interests need to be protected, it is important to remember that, given the amount of capital expenditure that goes into developing any clean energy project, the developer will also be heavily invested. Therefore it’s all about striking the right balance.

Hugh: And, one piece of advice for developers in their dealings with landowners what would it be?

Maria: The most successful projects are driven by a good relationship between developer and landowner. This is key because they need to work together to take the project from concept to operational phase, and if there are strong relationships and good engagement when developer needs to ask for consent or wants to discuss an asset life extension, all parties are in it together.

Hugh: Finally, can you tell us a bit about TLT and your work in clean energy?

Maria: TLT are a commercial law firm with over 1,000 staff working across all UK Jurisdictions.

TLT has over 20 years of experience acting for clean energy clients and that’s where my journey began too. I joined TLT over 20 years ago as a trainee at a time TLT was getting involved in financing some of the first UK wind farms. I was given the opportunity to get involved in those early projects in a sector that was new and novel, and that I was both personally and professionally passionate about. We’ve now built the clean energy practice at TLT to one that is now recognised globally. We’re pretty proud of that! 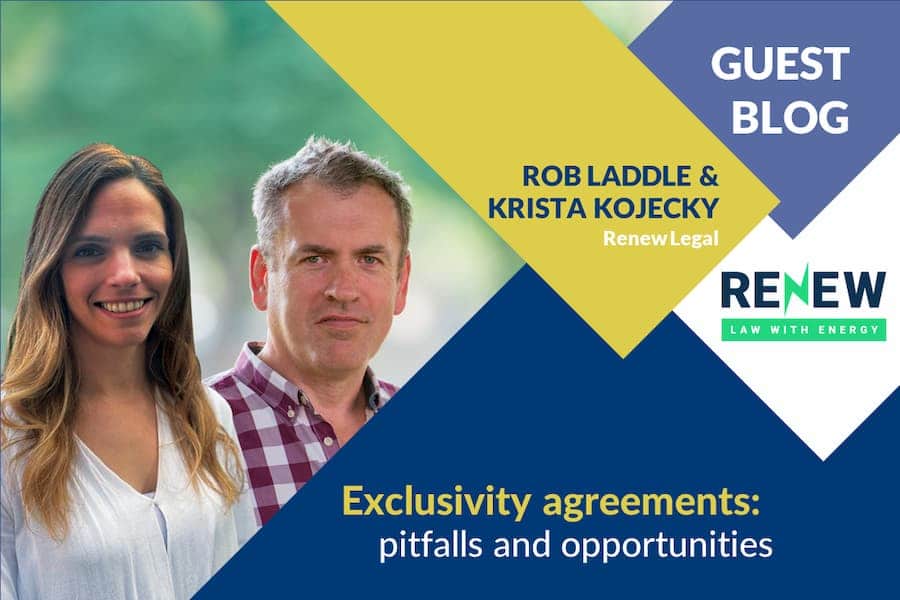