Skip to content
Previous Next
What is network complexity?

What is network complexity?

In electricity distribution and transmission network design, network complexity is the limit to the number of connections (or tee-offs) a circuit can have.

What is the impact of network complexity limits on connections

The impact of network complexity limits on connection feasibility is that a tee-off may not be feasible on a part of the network at its limit for ends. This adds the requirement for, and cost of, a looped connection and associated switchgear. And, where the limit of addresses has also been reached, even a looped connection into that circuit will be unviable.

What is a looped connection? 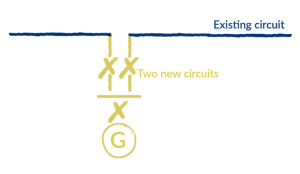 The disadvantage of a looped connection is that it requires two new circuits to be laid and additional switchgear (circuit breakers) on the site. The network company may also have an enhanced requirement for a communications circuit (such as fibre) to facilitate a different type of network protection scheme.

The advantage is that its sometimes allows for a site to feed out in either direction during network outages.

Roadnight Taylor can help you understand the impact of network complexity on your proposed grid connection.  To find out more call us on 01993 830571 or send us a message via our contact form.